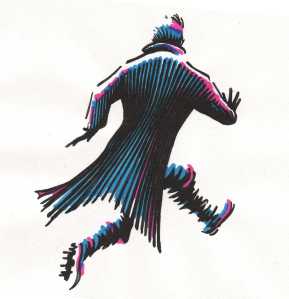 Reflecting an uncritical disposition, he took on the patterns of the life that was offered him. He slept in his room, he drank in the saloon, he attended church on Sunday, though that diversion was not offered, but rather, insisted upon by Pastor Welsh. He loved the way the sun came through the pointed windows of the church, and the smell of the pines that rushed into the place after a hard rain. At Christmas time, Ozwald would sometimes help the Pastor decorate the church with ribbon.

Then there was the digging.

The undertaker was distant when he was not drinking, but Welsh was always accessible, so much so that Ozwald found himself talking to him even while digging alone. On cold nights, when the hard ground gave itself grudgingly, often the conversation was profane and unbecoming, but it was genuine. As Ozwald got knee deep and further, he was taken away from pretense and propriety, deeper into his own mind, and then away from there, to a place where his gut and his aching arms, and his cold, wet feet, were given voice.